Forgery has long crept into our educational system and, counterfeit and forged admission status / certificate and document have upper hand in various certificate and degrees awarding institution. Invalid studentship has become greater than valid studentship. The need for student admission verification system has become necessary to check mate and expunge invalid studentship, invalid document and invalid certificate yielding to authenticity of certificate and documents. This research work Designed and Implemented Student Verification System for University of Uyo. The proposed model is concerned with monitoring the studentship of students, keeping students basic academic record, tracking students if there is malpractice of any kind and, verifying every certificate of University of Uyo in the future and making sure fake admission is reduced drastically.

The system was designed and implemented with PHP, MYSQL, HTML, AJAX, and JAVASCRIPT Technologies.

In this modern age, computers have verified the cause of their existence. The advent of computers in our society caused a lot of criticism on the danger it poses on the society. Critics of computer and new techniques express their fear on how computers will displace and replace all human skills thus resulting to mass unemployment. The presence of computer on virtually every field of today’s fast life has proved the critic wrong as the invention of computers and new technologies continues to create additional jobs for those who identify themselves with computers and new technologies. This make computes partner to human beings in any fields of human endeavor. Over the past decades, students identification and verification has been a major problem in large institutions as documents, certificate and studentship can be forged at a great rate and easy way, using the computer negatively. Forgers fail to know that in this fast moving world, the computer has equally served as an aid to decision making, verification and authentication. This is because of computers efficiency in terms of speed, accuracy, reliability, cost and security among others. In recent years, awareness has existed and created in people as it concerned the use of computer in verifying, authenticating and security activities either through web-based (internet) or window-based. Decision support system and others system like management information system and information system are used in organization. Decisions are largely based on experience and principle. The value of every degree is the reputation of the institution and the students produced, hence, the greatest obstacle to any academic institution which is dishonesty and forgery has to be balanced with verification and authentication systems and processes. “In recent times, effort are being made to build intelligence into computer system, whereby the computer can be used to process large volume of structural and unstructured information for decision making”. Said Uzoka, 1998.

The epidemic of fake admission is ravaging the Nigerian tertiary institution as victims to such fraud are often left frustrated. Students are sometimes offered fake admission with fake documentations from fraudulent persons posing as University Officials. This practice has led to many students losing their time and money studying in a University where they are not authentic students.

Another Issue is that the admission verification process in most tertiary institutions in Nigeria is very strenuous. During the analysis and data collection of this project, it was discovered that there existed a manual form of verifying students’ admission status, and for future purpose by the Students Affairs Department of the University of Uyo.

That is to say that the process of daily task and activities are done manually which is quite unfortunate; manual procedural for over one million admitted students yearly, the execution is always delaying and reduces result output quality. 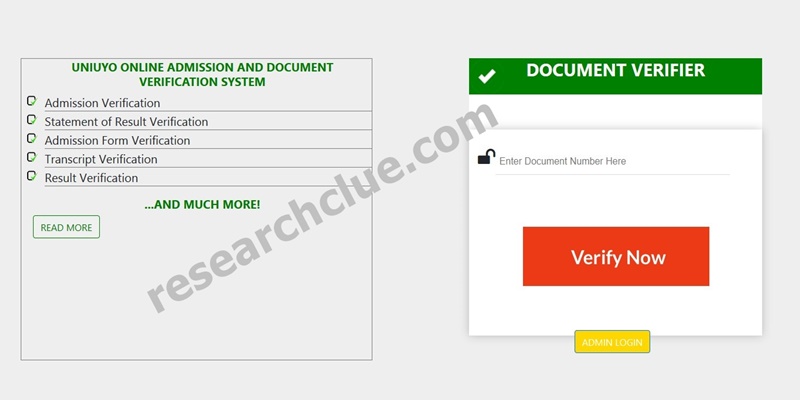 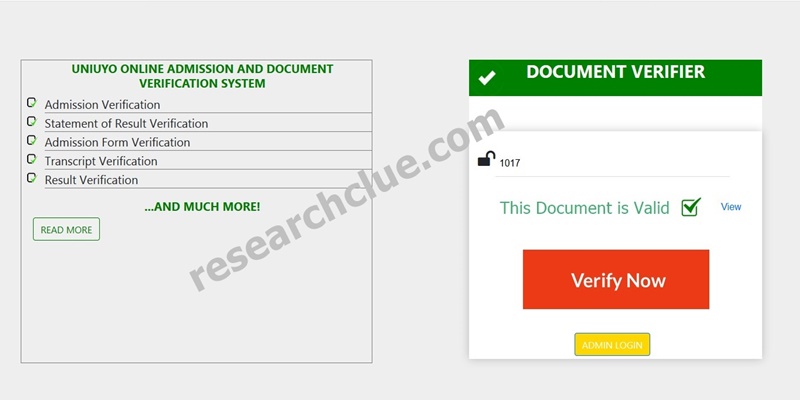 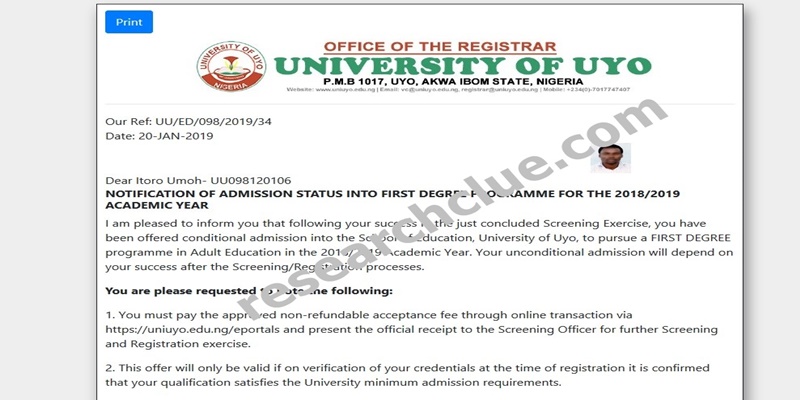 The scope and focus of this study is on students’ admission verification system, to help validate students’ admission status via the keep of their basic academic information and bio data updated. Importantly, the student must choose to be students of University of Uyo.

University - a high-level educational institution in which students study for degrees and academic research is done.

Verification - the process of establishing the truth, accuracy, or validity of something.

Identification - the action or process of identifying someone or something or the fact of being identified.

Manual - relating to or done with the hands.

Window-based - Hardware and software that runs a version of Microsoft Windows.

Invention - something, typically a process of development that has been invented.