The paper aims at designing and implementing a web enabled survey system that can used by research institutions in gathering information from respondents used in a research study. The need to gather data in a secure, cost-effective and effective way remains a major challenge for most research and tertiary institutions in Nigeria. This web based survey system aims at aiding researchers in gathering data from a large number of respondents in a cost-effective way, eliminating errors and data redundancy. The administrator post a questionnaires on the web application and gives the links out to his/her respondents to fill the questionnaires at the comfort of their homes and offices. The system is designed with Asp.net, bootstrap, CSS and MYSQL technologies.

Surveys are research designs or methodologies used to know a population’s demographic factors reported by a researcher through observation or the response of the respondents; it is used to know the opinions of respondents on issues cutting across different facets of the society (Sekaran, 1992).  (Hair et al., 2006) concurred that it is a perfect mechanism for collecting and evaluating the diverse responses from respondents based on their diverse work and life experiences. In supports of gathering big amount of data, computer technology may be a good option.  It is obvious to include that these days surveys are received via e-mails.  In addition, surveys have gone beyond being filled as a hard copy (printed paper) to now being filled as a soft copy through the advent of web based systems.

A web-based survey is the gathering of information without the intervention of the researcher electronically, by responding to set of questions on the Web (Thomas, 2003). Bearing in mind that Web based surveys are computer base, it permits bulky collection of data. Web-based survey management system comprises how the research group runs and manages different types of surveys through the internet networks. Electronic surveys allow research groups to build questionnaires as well as publish questionnaires to respondents. The advent of this technology eases the stress, and possibly the cost attached with manual distribution of questionnaires. Also, it quickens the distribution and response sequence. Web-based surveys are anticipated to be widely used.

However, it is obvious that a lot of researchers or organizations distribute their surveys through the traditional methods of either through mails, telephones, or some may decide to self-distribute by hand (Ariffin & Norshuhada, 2008; Zulikha & Ariffin, 2005; Tronstad, Phillips, Garcia, & Harlow, 2009). In this era of civilization, where the world has become a global village through the advent of ICT, it is not ideal to use the above means for data collection because it is quite slow and stressful in analyzing the responses of the respondents. Other issues such as cost, time and effectiveness are also within considerations.

Researchers employ different forms of surveys to respondents, and one of such forms is sending the questionnaire to them through mails. This technique entails cost, time, and efforts (Sekaran, 1992; Hair et al., 2006).  A pilot study carried out by 12 lecturers revealed that they agreed to employ any tool that can be of help in administering survey practice.  There are many commercial web-based survey management systems, but users have to pay for use besides having to register such as SurveyGizmo1, SurveyMonkey2, and QuestionPro3.  When the lecturers were interrogated, they prefer not to use the commercial web-based survey management system because they do not have trust on the system.  This implies that the lecturers prefer to use a tool that will ease the administration process in their survey practice, though it must be internal.  In order to tackle this problem, a web-based system will be developed.  The steps in developing and having a developed web-based management system necessitated two research questions which were formulated:

The system or software will be designed to tackle the challenges accompanied with the traditional survey practice; like the role of distributing questionnaire, gather feedback and store data, specify the period, and analyze the data (Sekaran, 1992; Barnum, 2002; Hair et al., 2006).  Accordingly, this study is proposed to achieve objectives as outlined in the next section.

1.3 Objectives of the Study

2. To evaluate the functions of a web-based survey management system. 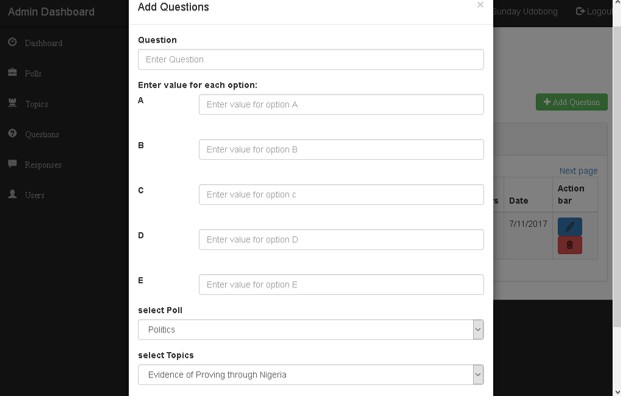 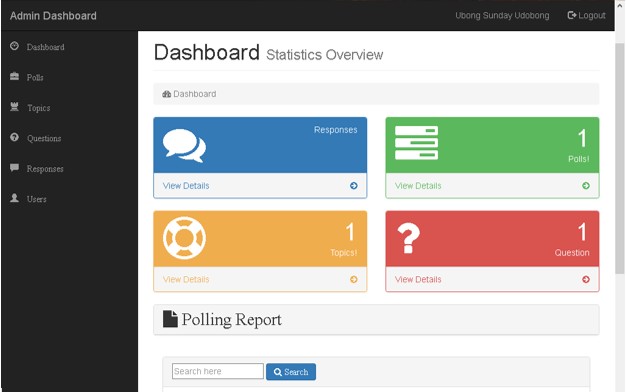 1.4 Significance of the Study

This study is expected to contribute significantly to different parties, including to the body of knowledge and to the researchers.

The design and implementation of a web based survey management system will be delimited to the University of Ibadan Research Foundation, Ibadan, Oyo State.

Survey Management System: A system that gathers information without the intervention of the administrator electronically.

Online: Over the internet or network.